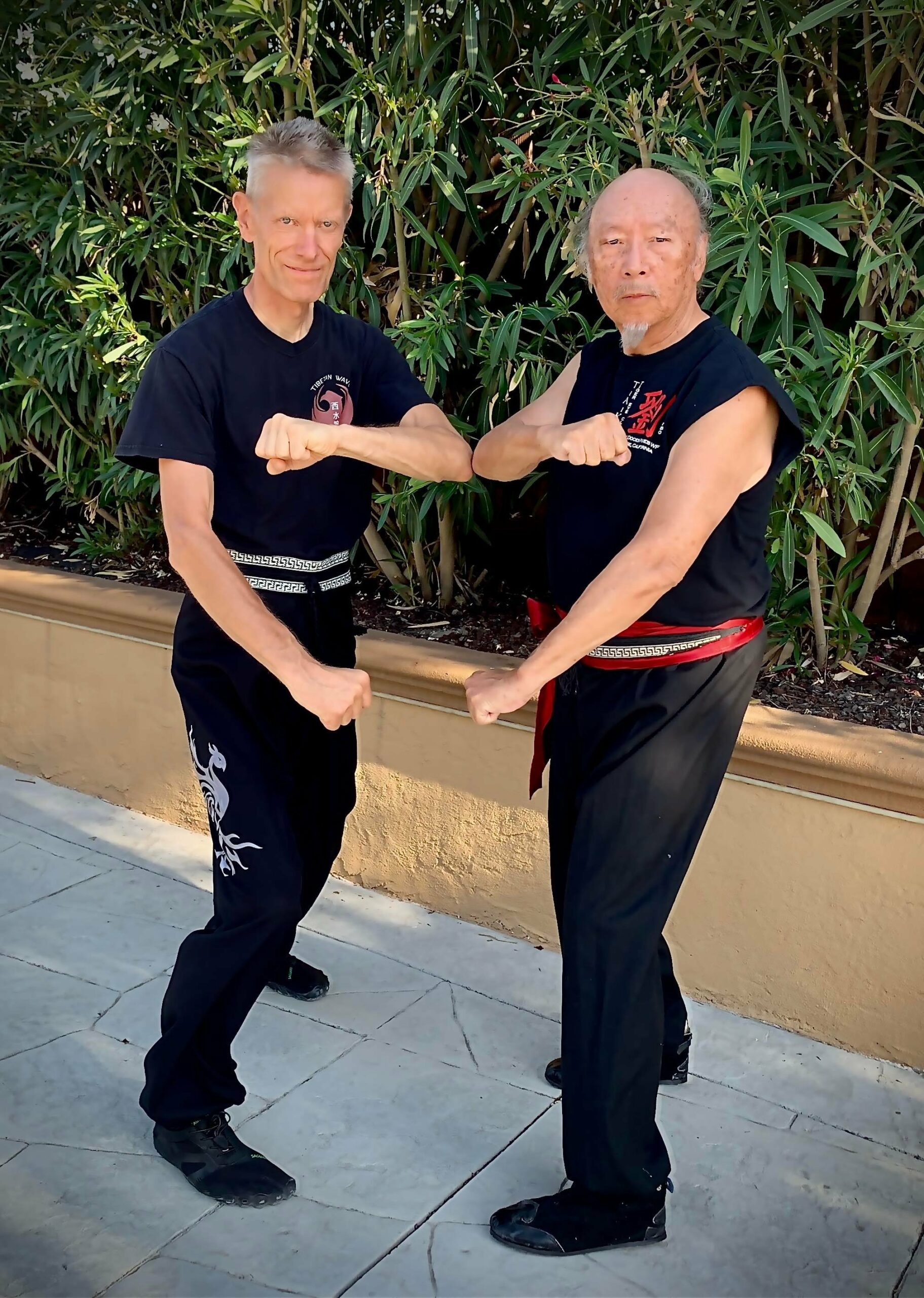 A life is too short

One life is too short to learn everything there is to learn from Siting Ron Lew.

August 2022 and I was back on the plane to San Francisco. After three years, I visited my master and Chinese foster father for the third time. How will it be this time. We had big plans and one week was, as always, very short. So, soon after arrival, we went into the garden without much delay. Everything was familiar. As usual, the large palm tree provided its shade at 30 degrees. We started with Escrima. I wanted to understand more about it. We didn't practice individual movements, rather he showed me basic principles. Also transferrable to close-range combat with the whip. I practiced with rubber bands, with ice hockey gloves and also without looking. As always, I wrote everything down afterwards throughout the day. In the evening we dealt with the book about Escrima. Siting Ron had already done a huge job with his friend Kinya and professionally prepared all the content. I was reading and we discussed many details. It will be a reference book on Escrima for advanced learners, with all its knowledge. Working on the book was to become our daily evening activity.

The next day we continued with Escrima. In the afternoon Sifu Rommel, his training partner from the Core of 6, visited us. It took us a few hours to take all the pictures for the book. These are intended to make the descriptions more vivid. The rest of the time was reserved for me. Sifu Rommel made an effort to slowly explain to me what he was training with me. I was overwhelmed. His “Slow” was still fireworks for me. Absorbing and implementing a lot of knowledge in a very short time took me to the edge of my ability to learn and to a fundamental realization. More on that later. In any case, I tried again to capture as much knowledge as possible in order to be able to pass it on.

The next morning started with keeping a promise, the extent of which I had completely underestimated. "We learn the FuHawk". Siting Ron's favorite shape. 250 moves in over 4 minutes. On average, a form takes a minute or a half with less than 100 movements. Let's go. I had already done the preparatory work and dealt with the basic process. But it really didn't look like more. I had to show a little piece. Then every hand and foot movement was dissected, explained, corrected. Then practice under observation or first train processes to grasp the meaning of the movement. It definitely looked like in the movie "The Karate Kid", only I'm much older and physically not that agile. After practicing, I wrote everything down, every hint, every correction.

It went on like this all Saturday and Sunday. Show a piece, correct, practice, write down. Eat something in between and get out under the palm tree again. A very pleasant break was the meal with Sifu Malia. We gave her our book "Life & Chi" and exchanged ideas intensively on many topics. As usual, a very warm and open-minded atmosphere. This encounter motivated and inspired me a lot. Her appreciation and openness are extremely refreshing. Then it was back to practicing and correcting. The sheets filled up and the notes became more and more refined. Some things I only understood while doing or asking again. Learning a form with such accuracy and intensity is really comfortable. It's a pity that this doesn't work with every other form in everyday training. But I also recognized and understood fundamental things for the other forms through this form.

On Monday I was surprised again. "This afternoon we'll record everything." So practice and internalize everything precisely down to every finger position. Based on the Chinese model, we divided the form into images, which already exist. In this way, twelve individual films were created, which together show the entire form. Siting Ron had also put on his clothes because he too wanted to show the form. I don't think there have been any film recordings of this kind with him before. I'm amazed at how expressive and agile he can still show his form. I'm very far from there and I probably won't get there anymore. It is this mixture of flowing Tai Chi movements and powerful, quick changes that make up what he calls “finness”. I was happy to have thought of all the details and to have shown this form without any dropouts at all. When we had recorded everything, a very moving moment came. He handed me a t-shirt from his Tiger Eye Claw school and said, "Now you're one of mine." I think I've grown a bit there. I did not expect that. I am very proud of it and appreciate it very much.

On the last day we trained with the whip. It was about the transition from long-distance to close-up distance. That was important for the part in the new book that deals with the whip in the short distance fight. I also showed what's new in our classes and seminars. Siting Ron also gave me a harmonica and showed me how to play it. Again, many wow effects that I didn't expect at all. Then it was back to the airport and home. At least I saw the city of San Francisco with its famous bridge again in flight. No, I'm not sorry I didn't see anything of the city. Even if that is difficult for many people at home to understand.

Again, I'm deeply grateful to have been able to be a guest at Sting Ron's for a week. I've become a bit more Chinese with the form, as he puts it so nicely. And that means less angular movements, softer, more relaxed, more balanced. I want to keep that. Not easy in this everyday German life. I have absorbed and recorded a lot of knowledge, which I will impart in my seminars. And a realization has matured in me that is a bit painful, but at the same time liberating. My life will not be long enough to learn everything I want to learn from him. Therefore, in the future I see myself more as a mediator who collects and passes on the knowledge of Siting Ron. For example, by inviting Sifu Rommel to Germany so that anyone who is interested can learn from him and thereby broaden their horizons. This includes learning the FuHawk. Hardly anyone in Germany can do my new favorite form. I may and will pass on this form at a suitable time. Last but not least the book about Escrima, which will be published in the next few days. Here, too, I see my contribution in the multiplication of this art, without ever achieving mastery. But if only a few interested and diligent people make progress by fulfilling my mission, the effort has been worth it. Of course, I will continue to make sure that Siting Ron can come to Germany for as long as possible so that we can all experience and learn his knowledge and skills first-hand. All of this is a matter of the heart for me, because I want to honor his statement "You are my Chinese adopted son".

You can buy the Eskrima book HERE!