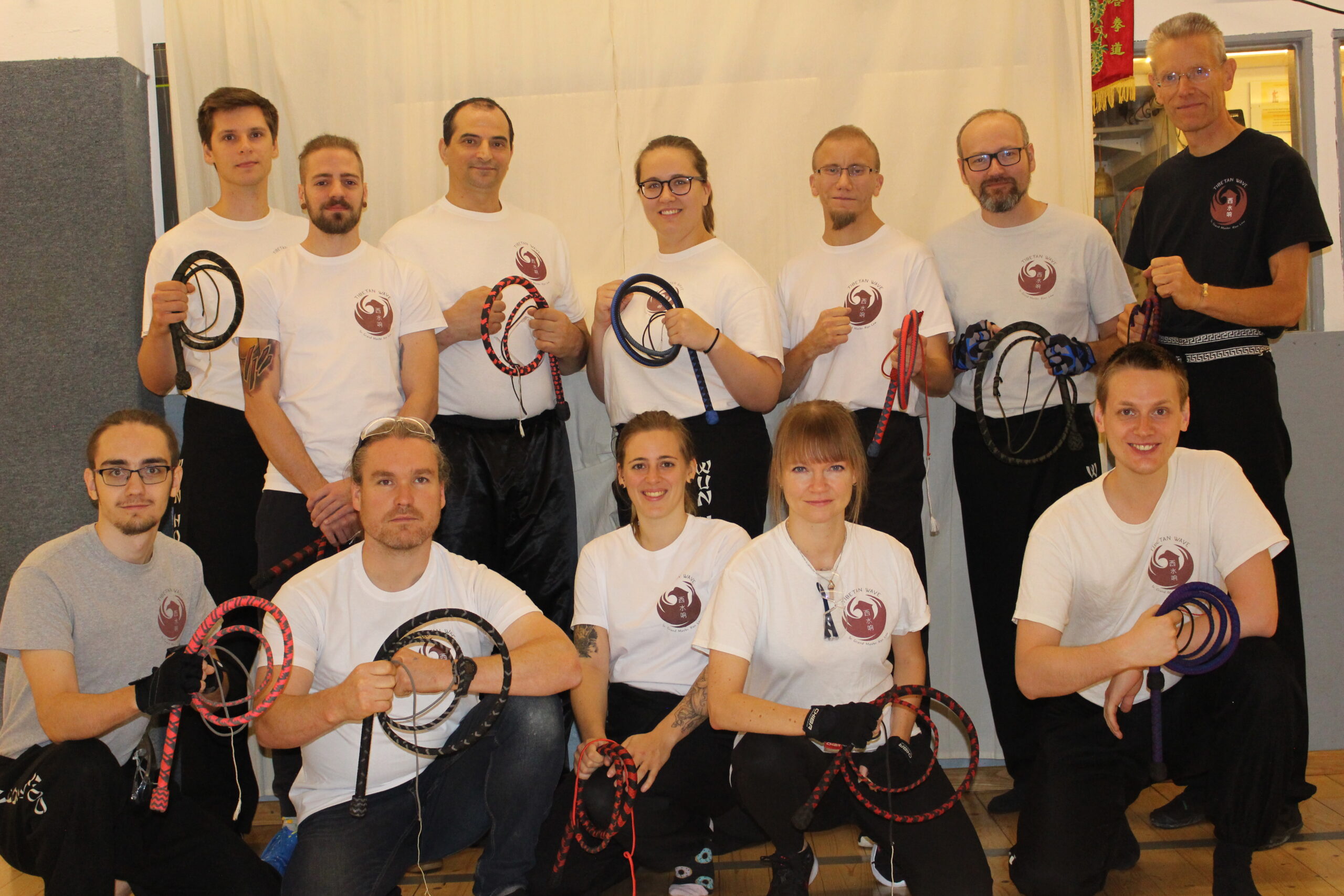 The last time this year there was a whipping seminar on September 17th. I was fresh back from my visit to Siting Ron. There was so much to convey that the note was longer than the time. We welcomed three new members, Jessica, Fabian and Pietro. We have the Outdoorcamp Bosau to thank for that. There they took part in the trial lesson and now found their way to us. Warm welcome.

As usual, we began by repeating what we had learned so far. For the starters, it was of course about the basic movements. For the first time I taught with the support of Assistant Instructor Arvid. This enabled us to convey more in the same amount of time. For me, too, a clear improvement and relief in the classroom. The newcomers learned quickly. So we made good progress. The middle group was quickly back in the middle, so that we could devote ourselves to new further movements. At the most advanced we managed to walk most of the form.

After a short break we started the fun part. Today we fought balloons first. It's not that easy to hit them in such a way that they burst. The wind didn't make it any easier. With the balloons mostly hanging from the fence, the crackers suffered significantly. Stefan had his hands full to repair all the damage. After all the balloons were destroyed, we moved on to pasta and beer coasters. The meeting of the cardboard cover was a special challenge this time. The wind made the trajectories unpredictable. Nevertheless, everyone had a lot of fun and I had to stop because of the lack of time.

In the last part we dealt with what new knowledge I had brought with me from my journey to Siting Ron Lew. First we tried to catch the moving end of the whip from within the whip movement. That was one of the themes in San Francisco. There we dealt with the transition from long-distance to short-distance and found that the whip has to be rolled up at least once in order to still be able to use it effectively close to the opponent. In his new book on Escrima, Siting Ron describes several ways to fight with a whip at close range. We will go deeper into this topic. Then we worked on various principles that apply when using the whip as a handgun. This can of course also be transferred to other weapons. A lot comes from Escrima. In this respect a multiplier effect. There was not nearly enough time to convey all of my prep sheet. It will continue seamlessly next time.

In the end, most were surprised that the class was over so quickly. The weather also held up well, so there was no forced interruption. We'll meet for the next seminar in January, then of course in the hall. I am particularly pleased that at almost every seminar new interested parties can always be welcomed and this means that there are more and more of them. Thank you very much. Stay on the ball, or rather on the whip. See you early next year, snake tamer.