ABOUT THE FASCINATION OF OUR STYLE

Tibetan Wave Filipino Fighting Whip (Tibetan Wave - Filipino Fighting Whip) Our special style is called: Tibetan Wave. The nylon whip is wrapped with paracord and filled with steel balls. The Filipino fighting whip measures around 2.25 meters to the tip and has emerged as the ideal weapon. This type of whip is classified as short. It's very fast and easy to maneuver in any direction. The whips are specially made by my good friend Bobbi Holyoaks in Moab, Utah. In less than two years she has become one of the best nylon whip manufacturers. Our style also includes the use of the left open hand, which other eminent whip specialists do not use or foresee in their style. My foundation is based on the Chinese Kung Fu training - North & South, Tai Chi, Qigong, Meditation, Eskrima / Eskrido (Cacoy Doce Pares World Federation). All of these had a profound impact on the quality of my whip work. In the Tibetan Wave style, we control the whip with ease, elegance and power. These properties are visible manifestations of the so-called chi energy - something rare in the world of whips. You absolutely have to experience this unique combination. What are the technical aspects of the Tibetan Wave? Some of the principles contained therein are yin / yang, playfulness and the entanglement of the human mind with the whip. What is special about it is the mixing of the movement of the whip, the human body and the movements of the free hand. Train and explore the softness of the movement of the lash. Study the entire course of the whip movement and control the acceleration or deceleration of the bang. Pay attention to the position of your body to dance with the movements of the whip. Appreciate the flow and the connection between you and the whip. The whip lives as you live. Let the whip inspire you. Let them be creative! Thank you for joining us on this new adventure in the Tibetan Wave Filipino Fighting Whip group. It's an art! "Let your inner child come out and PLAY."

You want to know more?

WATCH THIS INTERVIEW WITH MALIA AND GRAND MASTER RON LEW! 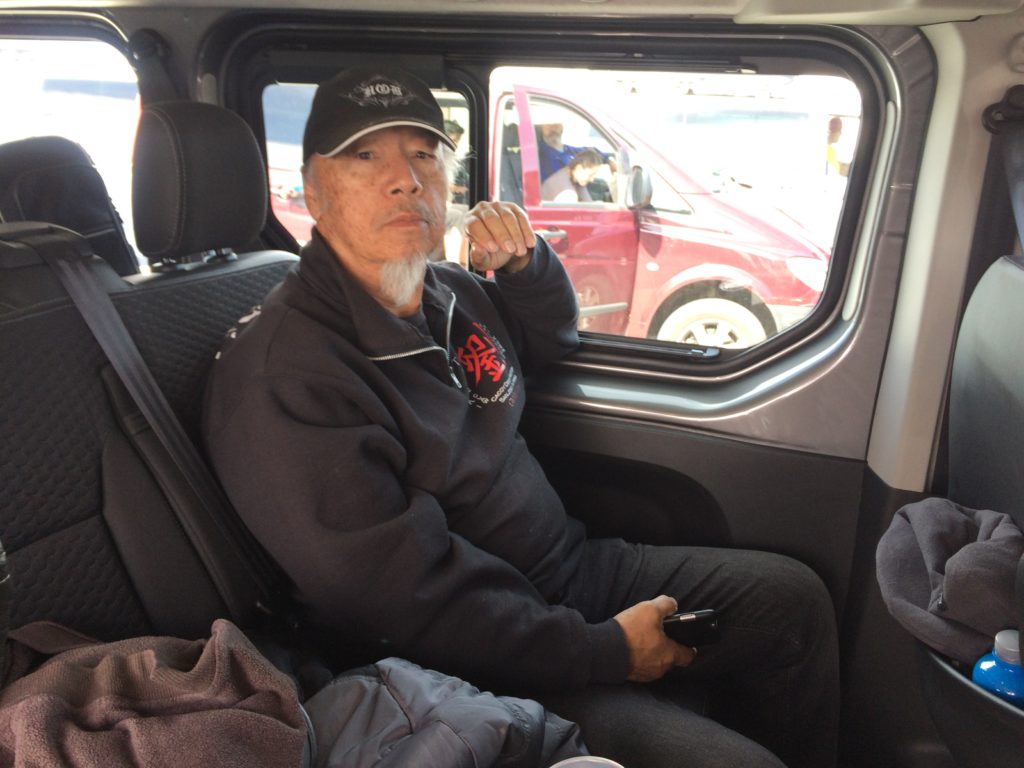 It is June 2017.
We're on an unforgettable journey through Norway with Siting Ron Lew (see our Blog Post) and may experience this wonderful people in private. He also instructs us in whip fighting and we are always enthusiastic about his championship.
Slowly, we are awakened in our desire to do the same. How about we being the first martial arts center in Europe to teach Siting Ron Lew's martial arts interests. Siting Ron Lew agrees and promises to support us. This is how we came up with an idea on this unforgettable journey, that we are implementing today. 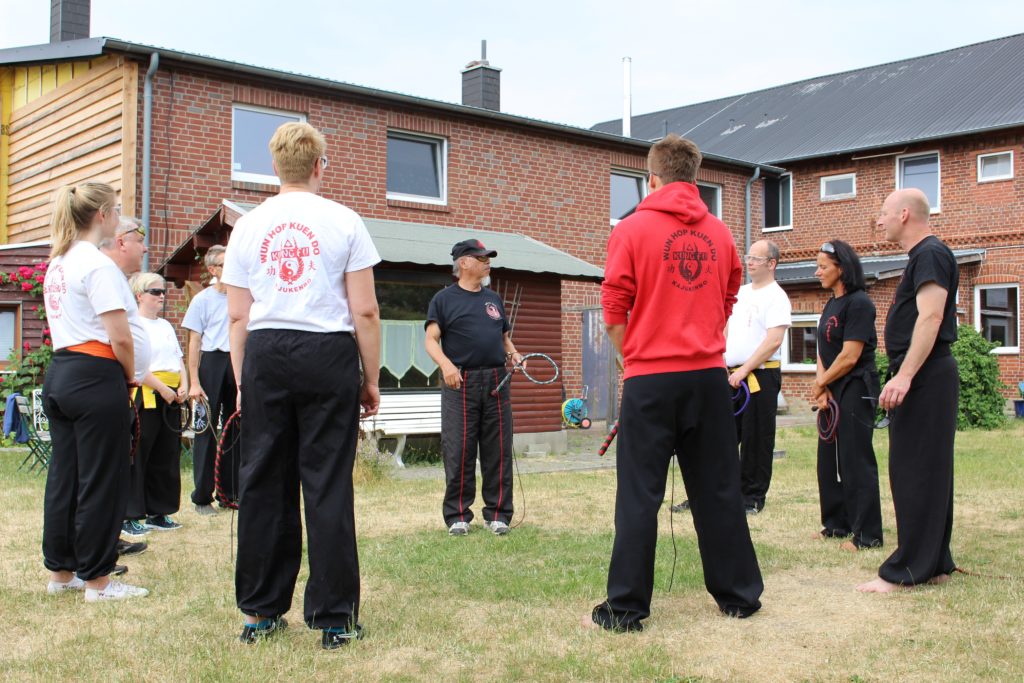 One year has passed. The first courses in Bad Segeberg and Schwerin were conducted in June this year. Siting Ron Lew taught himself. The response was great.
We have been working intensively on our website and organizing seminars since summer.

Our first complete training year. It started in January. A total of 4 weekend seminars brought us forward. It was about a lot of basic training and fun every time. It didn't matter what you can do physically. Everyone has found their way to master the whip with skill and perseverance. We are now a total of 42 more or less active participants. 7 already have the second level and 20 have the first level. I myself made the 6th level in San Francisco.

We used every opportunity to present our style. There was a taster course in the Bosau outdoor camp, Fraggle Alarm Schwerin and Waldheim training camp. This has led to new registrations and our current number.

The highlight was certainly the seminar with an exam with Sr. GM Ron Lew. He gave us new impulses to continue training until his next visit. At the end of the year we tried something completely new, a seminar on how to build a whip. That came out very well and we continued next year.

At this point, a big thank you to Claudia, who helps build and repair the whip and brings in all her knowledge to always ensure success. Thanks to Thomas, who spends many hours to keep the website up to date, to keep it up to date and to add new topics and functions. And of course thanks to Sigung Jürgen, who makes every semiar special with his creativity and teaching experience.

All I can do is thank everyone for their interest and participation, in the hope that everyone will continue to enjoy it and that we will continue to grow. By the way, we now have interested parties from Scotland and Poland and the first commitments from Saxony-Anhalt. 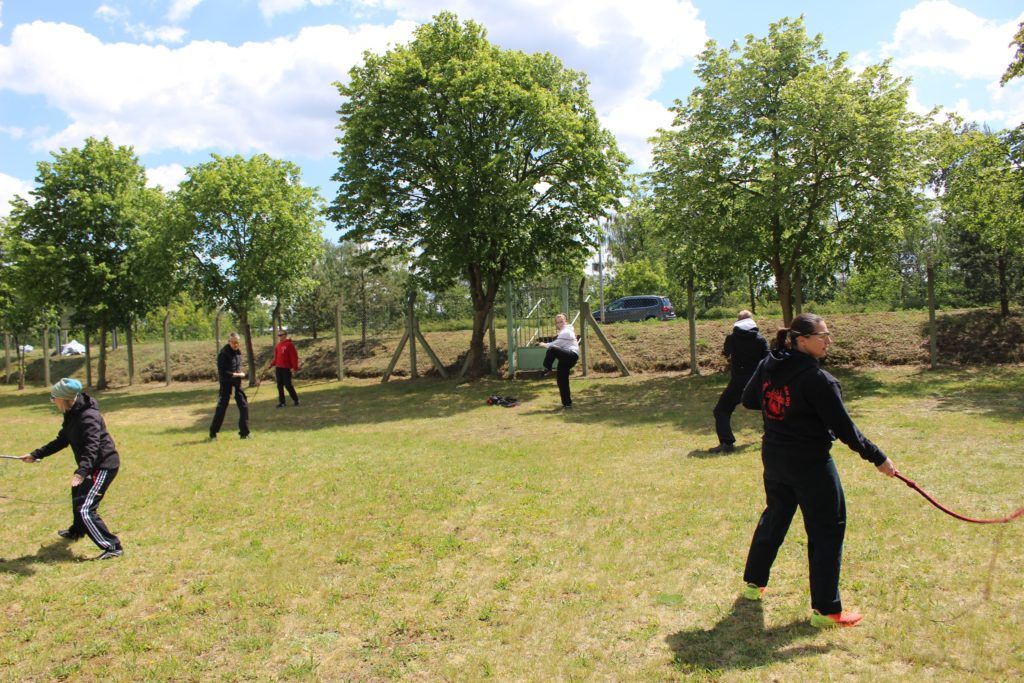 Hold together... but separately please

This year everything was extraordinary. It started well in February. Beginners and advanced students trained together at the first seminar. It could have been a year with many new prospects. Then followed a period of great uncertainty as to whether and to what extent we could still meet. Significantly fewer came to the seminar in June. But with a lot of fun. We had to keep our distance. We have that anyway most of the time when we practice with the whips. After that, it got quieter for the rest of the year. Seminars were no longer allowed, everything had to be canceled.

For this we have set up weekly training times in the Schwerin Kung Fu School. Claudia and Arvid in particular made intensive use of this. One of the things we started doing was hitting moving targets. A great challenge with a great fun factor.

The book about GM Ron Lew was finished just in time for his birthday and is now available from Amazon and our website. I worked on it for three years with my children Christine and Thomas. For him, a great joy in this contactless time and a sign to the world that it will always go on. The German translation will follow soon.

At the moment and certainly also in the next year, it is important to persevere and survive with the school and the training groups. He who is strong stays when it is easy to walk. All who hold out now are VERY OK. To a sociable and training-intensive next year. 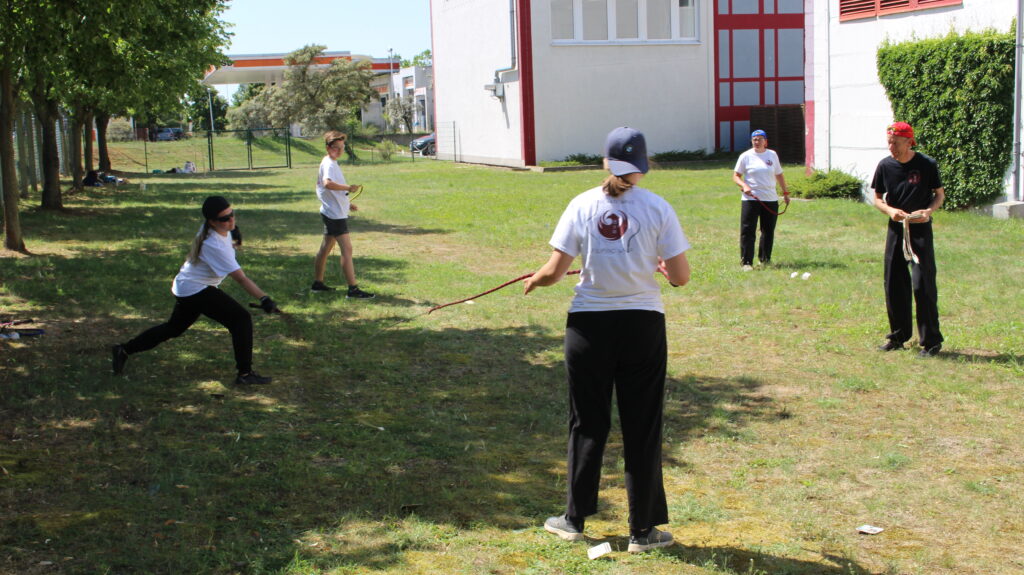 The fifth year. How time is running The editions are still extremely restrictive and do not serve to broaden our style on a large scale. A new format is being integrated into the lessons, online lessons. This increases the range extremely. It now goes to North Rhine-Westphalia. It looks strange to the neighbors when I teach in front of a big TV in the garden when the temperature is just below zero. Passion that creates suffering.

In the warmer months of the year we managed at least two seminars outside. The participation is manageable. But nothing can stop the real fans. Birgit drove an extra 7 hours from Bavaria to be there. Respect for it. Since there are no training camps throughout the year, we cannot advertise ourselves anywhere on site.

The German translation of the book on Siting Ron Lew will be ready in the spring. That revives the interest for us again. Siting Ron Lew himself advertises his book in numerous interviews with him on the Internet. He is very proud of it. The book experiences a real boost, especially at the end of the year. It can now also be ordered in printed form from Amazon (Order now from Amazon: german or english Version). Some treat themselves to such a nice Christmas present. Again, Thomas has invested a lot of effort to get everything on the way professionally. He has also completely renewed the website without it being noticed on the outside. Now we are up to date again here, with many new effects and even more appealing to join in.

In the KungFu school in Schwerin, the whip has now received a fixed lesson. We are currently training on Fridays at 6:30 p.m. The hard core has expanded. With Eve, Jana, Kristin and Cornelius, it gets pretty tight in the training room in the cold season. The ceiling is too low too. This leaves us with many shortened exercises, especially horizontal movements and wrist instead of arm movements. The fight against beer coasters has also become an integral part and the destruction rate is increasing. So the training room is always swept properly afterwards.

For next year, I hope that by the middle of the year at the latest, there will be regulations that allow stable teaching and seminars. Also, it's time we met Siting Ron Lew. After all, we have to show him what we can do by now, take exams and collect new knowledge. Incidentally, this year I was graduated from Siting Ron Lew as Head Instructor Germany. That corresponds to a Sifu title in KungFu. I've been very happy about it. It is a recognition for all of us, because we are really unique (unique, not well-behaved), at least in Germany. 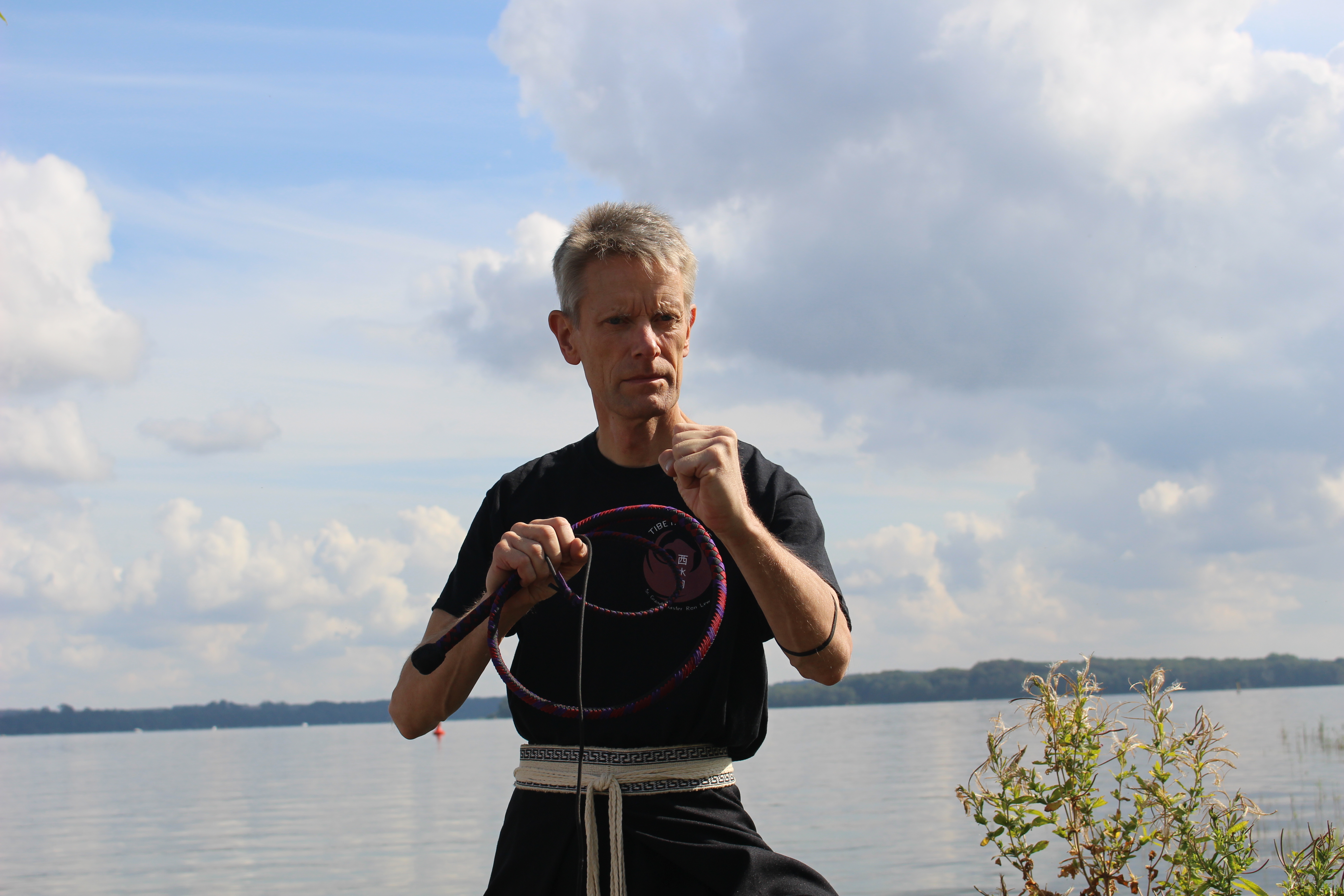 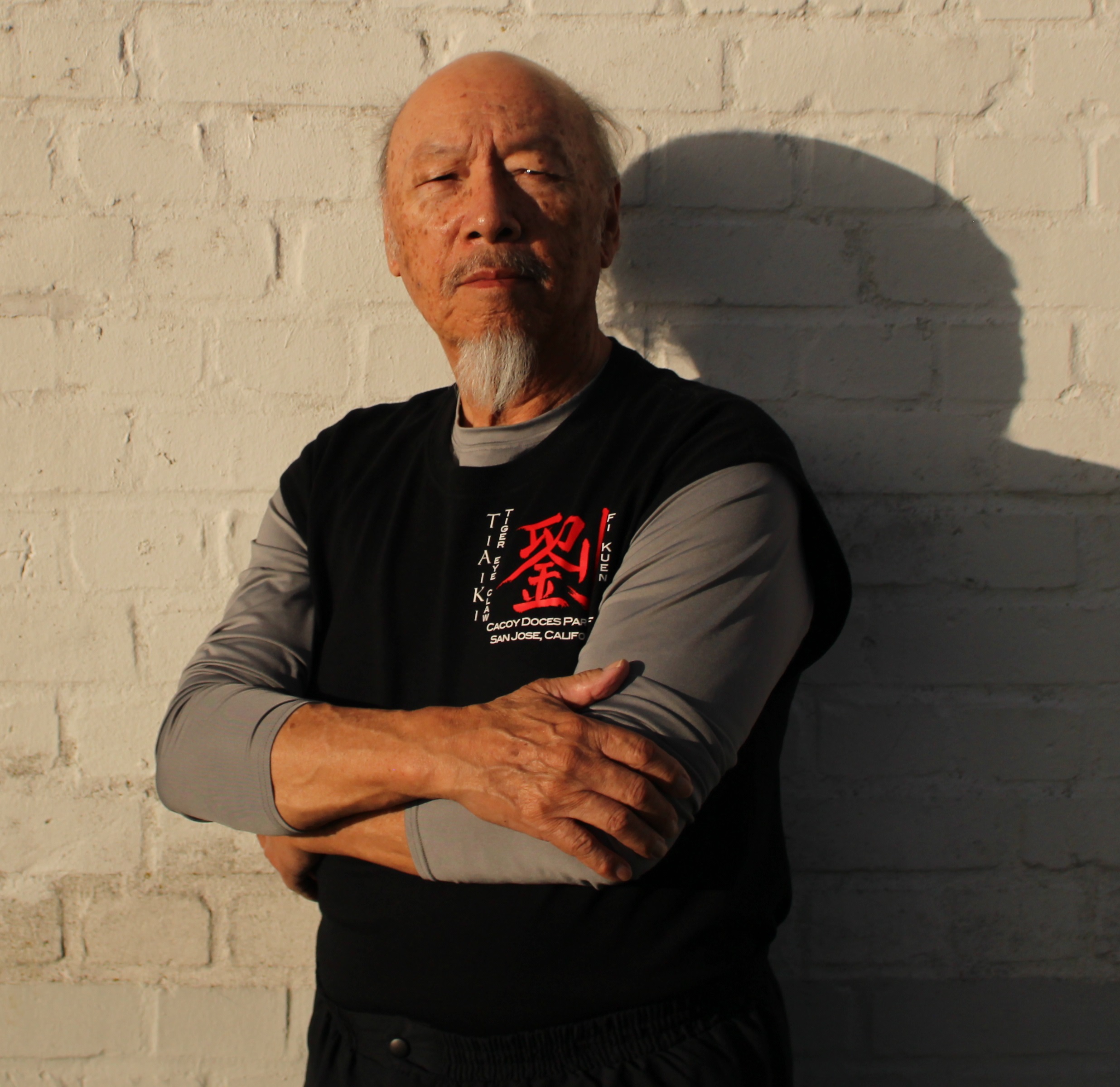 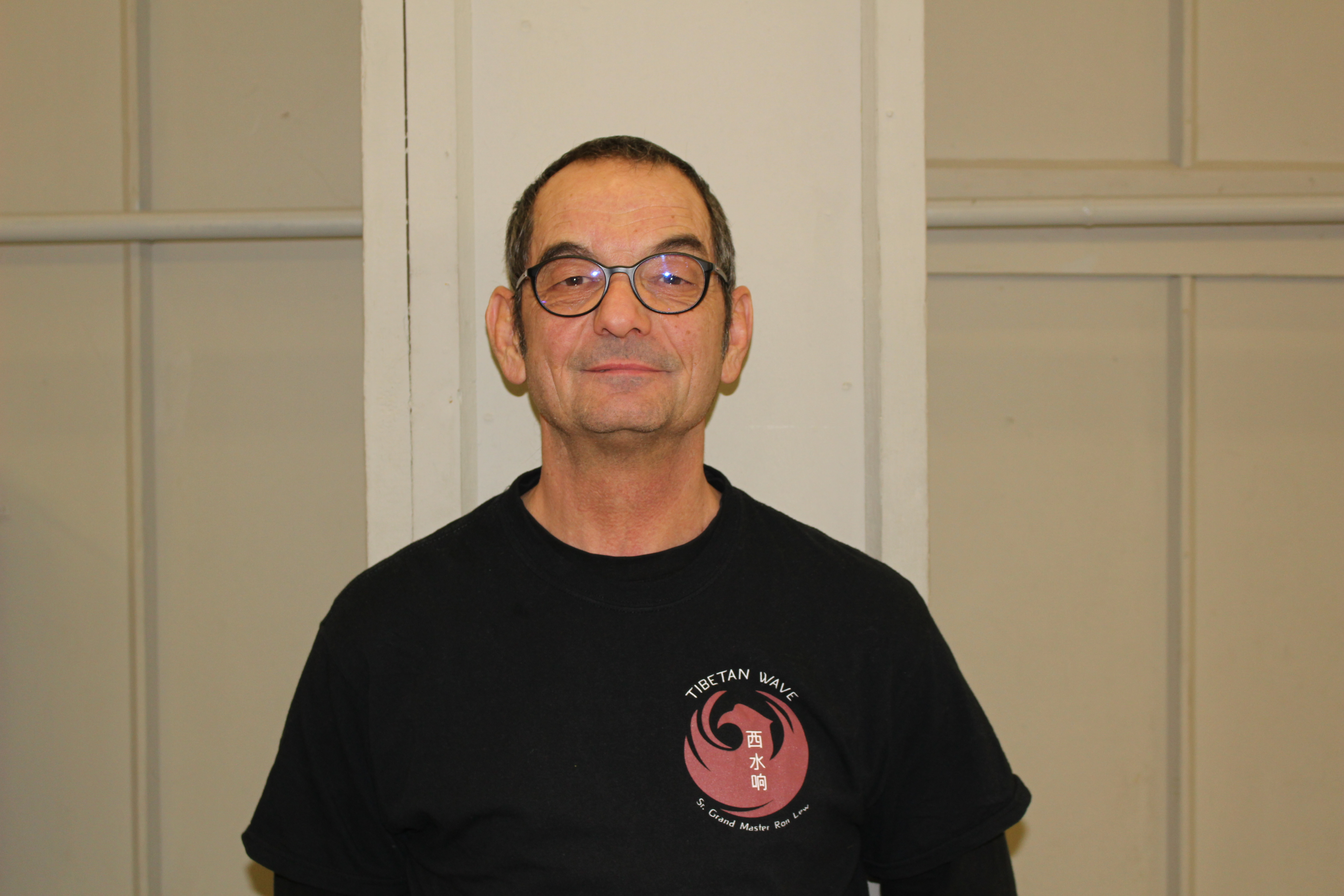